This article is available in Romanian thanks to Irina Vasilescu and in Czech thanks to Barbora Lebedova.

This article is part of a series documenting my project to make artwork from DNA. In the last article I showed off what the artwork looks like. In this post I’ll explain how I analyse an individual’s DNA to extract the information needed for an artwork.

It’s going to get quite technical, but I’ve tried to include enough information that the interested layman can understand it too, perhaps with a little googling.

A brief recap. Right back at the start of this project I decided that my genetic artworks will consist of a number of distinct shapes. The more related two people are, the more objects will appear in both their artworks. Have a look at these two artworks:

Each of the 12 shapes has a unique personality and can easily be distinguished from the others. A few seconds looking at both artworks above and you can see that some shapes appear in the same position in both artworks (e.g. the top left shape) and some are unique to each (the bottom left shape). This is what you’d expect the artworks of two siblings to look like.

Let’s say we have a collection of ten thousand unique shapes that each have a sufficiently distinct personality that it’s easy to recognise when the same shape appears in two paintings. Exactly how we create those shapes is a subject for another post. The task at hand is to take your DNA and boil it down into a list of numbers between 1 and 10,000, so that you share more of the numbers with a close relative than with an unrelated person.

I call this list of numbers the DNArtwork signature. It is safe to share publicly since it contains no sensitive information, except of course that if two people both share their DNArtwork signatures then you can tell how related they are. Here you go, here’s mine:

My algorithm for creating the DNArwork signature is, as far as I’m aware, the only really original idea I’ve contributed to this project, and it’s what sets this project apart from other artwork created from DNA.

In order to understand the description of the DNArtwork signature algorithm later in this article, you need to know some basics about DNA. If you think that SNP stands for Scottish National Party then you should read this section.

DNA is a massive molecule made from a string of smaller molecules called nucleotides. There are 4 nucleotides: Adenine, Cytosine, Guanine and Thymine, referred as A, C, G and T. Each nucleotide is about 13 atoms in size, think of them as the letters that spell out sentences in a coded genetic language.

Your genome is about 3 billion letters long and split up into 23 lengths of DNA called chromosomes. Chromosomes are large enough that you can see them under a microscope, and they look like this: 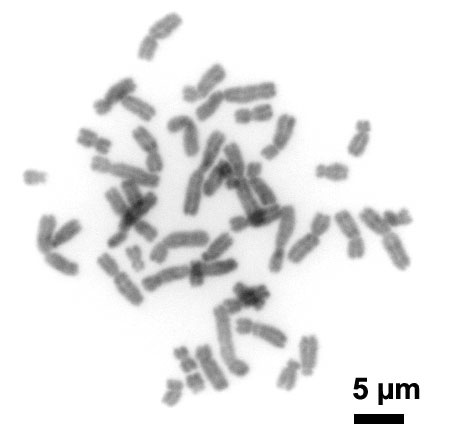 Because DNA molecules are continuous strings of letters, it’s possibly to identify any position on that chromosome by counting from one end of the chromosome, so for example at position 8,907,307 on chromosome 3 you have a A. This position is called a locus, or loci in plural. Each chromosome is roughly symmetrical, having two copies of your DNA. One copy comes from your mother and the other from your father, and they’re almost identical. In fact, your DNA sequence is almost identical to every other human – only about one in 300 loci have been found to vary between individuals.

Like most SNPs, we have no idea what rs180498 does, or indeed if it does anything at all, so it has an extremely boring entry in SNPedia. Some SNPs are more interesting, like rs1815739 which can make you a better sprinter, or rs7495174 which can change your eye colour.

It’s rare that both alleles of an SNP will be equally common. The more common allele is called the major allele and the less common one the minor allele. In the case of our boring SNP rs180498, the minor allele is A with a frequency of 0.167, meaning that 16.7% of DNA strands will have an A and the remaining 88.3% will have a G. These frequency figures are averages, and may vary between populations. In fact, our boring allele rs180498/A has a frequency of 13% among western Europeans and 41% among Japanese people, according to the 1000 Genomes project.

The DNArtwork signature algorithm relies on looking for relatively rare alleles – ones with a minor allele frequency of around 2%. I call these “marker alleles” because having one is a distinctive feature of your genome that can be used to distinguish you from others.

OK, now you know enough about DNA to follow how the DNArtwork signature algorithm works.

The algorithm consists of a preparation phase that is done once before anybody is tested, then an analysis stage that is done on a person’s DNA to generate their DNArtwork signature.

Generate a list “marker alleles” – SNPs with low minor allele frequencies across all ethnicities. I use these steps:

The use of distinct M and N values and the random assignment of the identifier number means that DNArtwork signatures are not comparable between creative projects that use this algorithm, unless they have cooperated to share the preparation phase of the algorithm.

Given a subject’s DNA test results:

The Personal Genome Project is a collection of DNA testing results kindly released by members of the public for the benefit of researchers. It contains hundreds of individuals, and a few full families.

Firstly, I downloaded the DNA test results of 30 people and generated genetic signatures for each of them. I looked for marker alleles that appeared more frequently than I’d expect by chance. If every person had a unique set of 23 numbers, I’d have 23 × 30 = 690 distinct numbers. In fact I had 263, indicating that each number appears about 2.5 times among the 30 subjects. The most common number appeared in 30% of subjects but there are relatively few of these common numbers: and 90% of the numbers appear in less than 10% of subjects. I was happy with these figures. Some excessively common numbers are to be expected since my minor allele frequency data is based on the 1000 Genomes project which only provides an estimate of actual global frequencies. The important thing here is that there are no numbers that reliably appear in most subjects.

Secondly, I downloaded two sample families, one parent with two children and one grandparent, parent, child trio. On average, these family members shared 40% of their signature numbers with close members of family, and as expected the grandparent/grandchild pair shared slightly less – 30%. Between families, subjects shared 15% of their numbers. Since both families were western ancestry Americans, some relatedness is not unexpected. Again, I’m pretty happy with these figures.

As far as I can tell, under UK and EU law, algorithms are not subject to copyright and not eligible for patent protection. I therefore have no issue with anyone creating a software implementation of the algorithm based on the description in this article.

One purpose of publishing this algorithm is to define some prior art, should anyone attempt to assert ownership of it in future. This algorithm was developed independently by me (Bernie Sumption) in August 2013, first implemented in software in August 2016, and published (in this article) on 14th December 2016.

One thought on “Making DNArtwork #7: how does it work?”